Fear of the FO

In knitting speak, the ultimate goal is a perfect FO, or "finished object."  It's an ideal day if one can knit up an article that is on gauge, neatly done, and is ready to wear or use.  Sometimes a project is finished straight off the needles; others require a bit of work.

As a fairly new knitter, I tend to pick projects that teach me a new skill.  When I look at a pattern, I don't think, "ooh, I don't know how to do that," I think, "ooh, I want that. I'll just figure it out as I go along." So far I've managed to muddle my way through several projects quite successfully, though I've learned that I have difficulty staying true to a pattern.

Are all knitters like this? Do they wander astray? Look, I started a post about finishing projects and ended up talking about wandering away from patterns.  The two subjects do come to a head in my current UFO (unfinished object) and are now driving me crazy.

Over the past few months, I've been knitting Sylvi by Mari Miunonen. If you haven't seen this pattern, it is an absolutely gorgeous cabled sweater jacket featured in Twist Collective. It's become one of the most popular patterns on Ravelry, and was nominated for Best Use of Texture in this year's Bobby Awards.

I started stalking the pattern.  I poured over other people's project posts, scoured forum threads for different colour and yarn ideas, and generally convinced myself that I could in fact knit it for myself. Being a rather unselfish knitter, I'd not yet completed a nice piece of knitting that was all my own.  About damn time, I thought.

So I jumped in.  I bought the pattern (ahem, along with several others, Twist is addictive) and started looking for yarn.  Before I began I decided to turn the sweater into a winter jacket of sorts. With the right wool and a lining, I reckoned, it would keep me cozy during the windy London winter (first pattern deviation.)

A little self conscious about the sheer volume of yarn I needed to buy, I decided to go the more economical route of doubling up Cascade Yarns Heathers 220 (second deviation from the pattern.) I got gauge and headed off into the unknown.

Now, four months later, I'm staring at the top of a massive yarn mountain, scared to scale those last few metres to the top. I've knit all the pieces and seamed them together. While the pieces aren't quite to size, the jacket is more than roomy enough and will block out easy enough.  I've knit all the petals for the flowers (in a contrasting colour, 500th deviation from the pattern) and sewn half of them on. 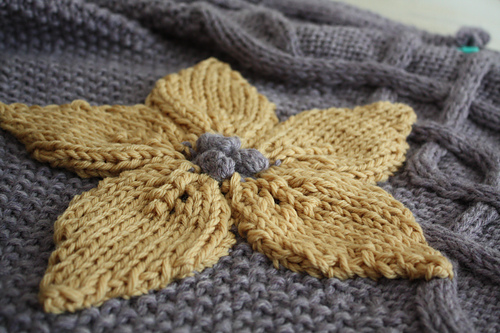 Really, all I need to do is sew on the two smaller flowers, the beautiful buttons I found at Loop, and block it.  Since I've been warned the pattern stretches, I wanted to wear it a few times before I line it, just to make sure I need to. The lining fabric is cut and pieced.

It's been sitting on the couch, staring me in the face, since Sunday.  I can't finish it.

Once I finish it, I will wear it.  Then my knitting skills will be on display for the entire world to see.  Will they see the multiple mistakes in the back seed stitch? Will they notice the large panel I had to add to get row gauge? My inability to pay attention across more than two rows of the pattern, which results in wonky leaves and questionable crossovers?

Probably not.  But I'm afraid to journey into the world of "real" knitters, in case I find I'm not worthy.  Knowing that knitters are a quirky and accepting bunch, this is a completely unfounded fear, but I have it all the same.

Tonight I will steel myself for the task. I will sew on those petals and buttons, and journey forth into the land of the FO.  What awaits me there, I do not know.  I'm hoping it's as satisfying as this chocolate cupcake I'm about to eat.
Posted by Ponddrop at 11:15 AM